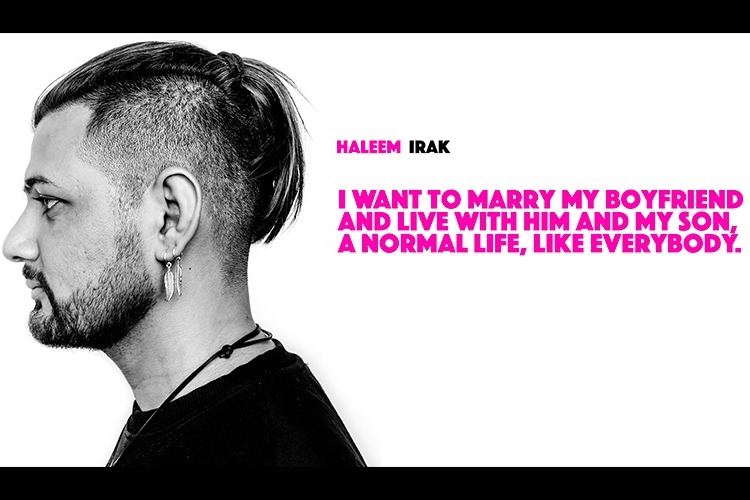 Although European countries are relatively accepting towards the LGBTQ+ community, the fight against the preconceptions and violence those people fled from might be a lengthy process.

Photographer Jean-Christophe Husson: ‘We aim to set off a dialogue, to break stereotypes, to address societal questions with a visual vocabulary different from that usually featured by the mainstream media. Our wish is to create a conversation between LGBTQ+ refugees, asylum seekers, and the public.

These women and men had to flee their countries, facing a violent discrimination that started within their own families. They were sometimes forced into marriage or raped by a close relative, forced to leave their houses, their town, finally their country, and often their children. Frequently, they had to escape from human trafficking.

We met many men and women from Syria, Libya, Uganda, Sierra Leone, Nigeria, Morocco. We were deeply touched by their stories and amazed by their energy, dreams, and goals for the future.’

The portraits are black and white photographs, on a white background. This is a deliberate aesthetic choice. There is nothing but a person, facing the audience. The person takes all. Each picture features a statement, a dream, a memory, or something else the person wants to share with the viewer. Most of these interviews were done during the photo session. This too is a deliberate choice.

We ask the person standing in front of the camera to think about this, about his or her words. They pose knowing that the viewer will read, will hear their testimonies. The text is part of the portrait.

Photographer Jean-Christophe Husson started his work about LGBTQ+ minorities in Marseille in France two years ago.

Now he is working on this long run project and has teamed-up with producer Andrea Wainer.